By QuirkAudio | Uncategorized | No Comments

So I have been very busy with some interesting upgrades and refurbishments. I will post more details latre but as a summary (and aide memoir):

my own MacIntosh MC75 tube amps

I recently completed an upgrade of an Onkyo A7, which is the most comprehensive one for these amplifiers I have done.

Starting with the power supply section, my customer asked that the 25,000uf 55v main capacitors be replaced, so after an analysis of the available options two Nippon Chemicon 27,000uf 100v units were installed, the original units were also Nippon Chemicon. These units are about 20mm taller, but the same diameter, and sit inside the case with no problems. As these had been done I decided to replace the main rectifier diodes, so Fairchild 1N5402were installed. The power supply capacitors were replaced with Nichicon PW series, except for C706 which is Bipolar, and here a Nichicon BP type was used. 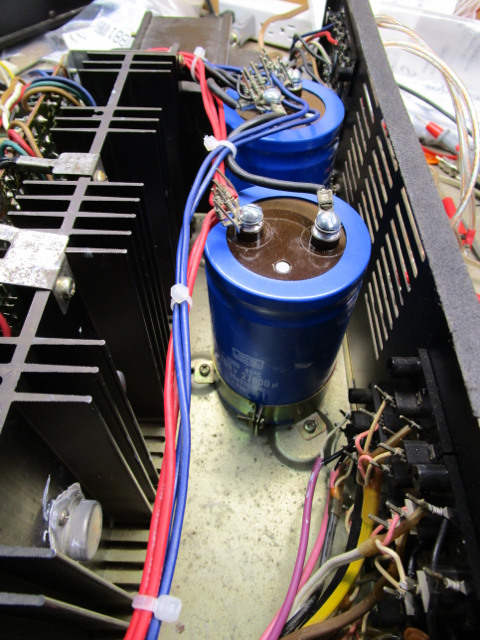 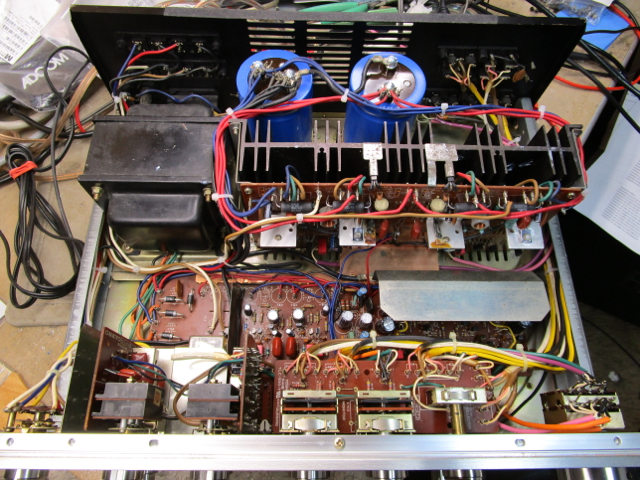 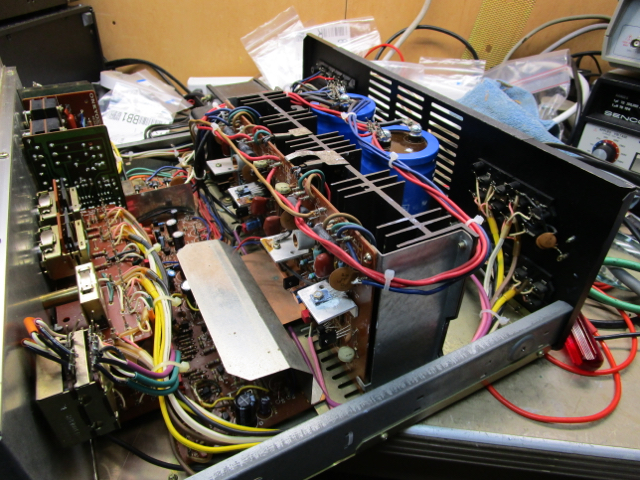 May-2017- I have just completed another A-7 upgrade, and measure the distortion at around 0.02% THD+N- which considering the spec is 0.1% is quite an improvement. This unit has all new transistors, including the outputs, except for the phono stage, as well as the mods described above.

the Onkyo A-10 is the big brother of the A-7 and A-5. These were certainly over engineered for their time and have both a heavy aluminum front plate (about 1/8″ thick) and very good quality components and construction.

I have only come across one A-10, and it impressed me a great deal, and effortless sound quality, great detail and solid bass..all with great transparency. I mentioned in an Audio Karma post that I proffered the upgraded version to a Krell KAV300i I have and what were the upgrades etc I undertook. 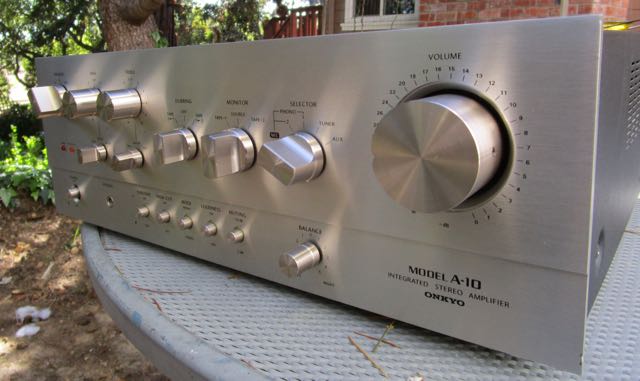 I have selected a number of mods from AK and DIY Audio and others listings, as well as my own tests, and these seem to make the majority of difference:

C215-218- These support the 18v rails that provide the power to the initial VAS stage of the power amplifier broads, and as such larger values provide a greater local reservoir. Replacing the original 2.2uf 50v with 470uf 50v makes quite a difference, “more bass” and better dynamics, I have settled on Nichicon HE (ultra low impedance)
C111-114- I have replaced these with COG Ceramics and have added 47uf 50v in parallel with each of these (across the 18v supply lines to the IC) and this again seemed to provide better dynamics, these are Nichicon PW
I tried Pilots (posted in AK) swapping of C109, C110 to 2.2uf 50v Wima- but ended up going back to Nichicon FG 10uf 50v- which gave more solid square wave response at frequencies below 100Hz
C107,C108- these were 820pf ceramics (circuit states 1000pf film)- so replaced these with WIMA 820pf 50v film
C203, C204- I tried a few versions (2.2uf Film, 10uf Film- both WIMA, Nichicon KL, Nichicon FG) and finally settled on ELNA SIMLIC II 10uf 50v- for me this kept the detail and was smoothest- also kept the LF square wave tidy.

one thought is to bypass the 10k ufs with a film cap (1uf?)- but again I have not tried this as yet. 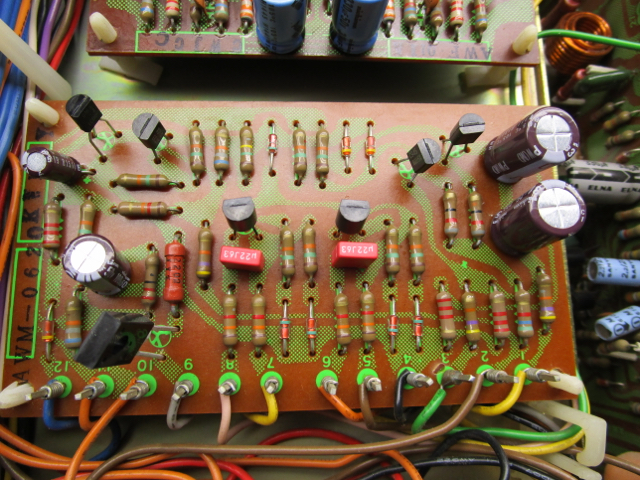 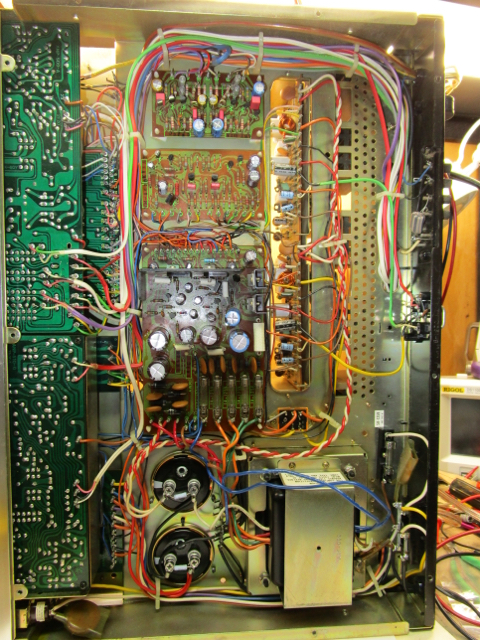 I have just started working on a defunct Pioneer SX 850. When it arrived there was no audio and no relay “click”. The insides, besides being dusty looked OK.

So I started with the power supply and removed and replaced all the electrolytic capacitors with a mix of Nichicon low impedance and audio types (all 105c). There are two transistors which should also always be replaced as they are often prone to failure. Having done this and with unit connected to a variable power supply with a fats trip and current meter, I turned it on, and still now relay click. So I tested all the voltages across the Power supply, ans everything is now as it should be.

So the next board to work on is the protection circuit, again there are two transistors, that should be upgraded, and all the electrolytics replaced. There are two small electrolytics, Sanyo, that I replace with WIMA film caps. Again turned it on, and hey presto the pleasant sound of the relay kicking in, so I then ran some tones through the aux input and all is good. Next is the phono equalizer, where all the transistors are replaced with low noise types and the small value electrolytics by WIMA film capacitors and the other electrolytics with Nichicon Audio types.

so I have two NAD 2100s in for upgrade, one had a cracked PCB and is now up and working, all with new electrolytic capacitors throughout- The Panasonic 10k uf 80v from Digikey drop right in perfectly.

However the second NAD is being somewhat recalcitrant and I have pulled out nearly all the driver and and output transistors to try and find the problem. The issue is with the High Voltage rails,

and now I have it coming out of protection, which led me to look into transistor equivalents and replacements. Although the main outputs (Sanken) are also avialable from Digikey, some others, such as the 2SB922

appear to be unobtainable, and have very few appropriate substitutes.