Revox was the consumer brand of Studer, who made some of , if not the, best analog tape machines used in the worlds great recording studios. Back in the day I worked on the A80 (24 track and A800 (24 track) machines, sometimes slaved together to create a 48 track machine. These all used 2inch tape (my favorite was Ampex 456) and were run at either 15ips or 30ips. My all time favorite was using the Studer 1/2″ tape machine running at 30ips (inches per second) to master onto as this captured all the information that the mixing console (SSL/Neve/Harrison etc) was capable of providing. Over the years I had owned a number of Revox tape machines, the A77 and B77 which were also excellent examples of electro-mechanical  construction.

So when my friend asked me to “recap” his B780 FM receiver, of which he had two- one purchased as a spare-I leapt at the opportunity. Revox HiFi gear has always been appreciated and was at the more expensive end of the spectrum when new, though as you were paying a premium, you got a top quality product!

The Revox, in line with many Swiss and German engineered products has a very specific method of construction, which when understood makes working on these units very straight forward- or appearing to be so. There are a number of circuit boards connected by a wiring harness, each board can be removed from the chassis and worked on separately.However there area couple of complexities……

Power supply board: This board supplies the low voltage rails to all parts of the receiver, except the main power amps. At the time Revox, and a number of other European brands, for example Tandberg, used “Frako” electrolytic capacitors, which have not stood the test of time well at all. If you have a unit with these installed, then it is a very good idea to get rid of them. It was also very popular at the time to use Tantalum capacitors both for their small size and low leakage, and without wishing to add to the long running debate on their applicability for audio, I come down on the side of always removing them from the signal path or any audio related functions (including power supplies), however I do tend to leave them in place in RF circuits where they are not involved with the audio chain.

So the power supply board is now fitted with new Vishay Electrolytic capacitors, as the mounting is axial rather than radial, and where applicable I tend toward the Vishay units over the Nichicon VX series. Additionally Nichicon KL low leakage types replaced some tantalums as did WIMA film for the lower value types. Finally Nichicon low impedance types were also employed. The three bridge rectifiers were also upgraded.

Power amp boards: These have separate power supplies for each channel to provide sufficient independent power capability so that a heavy load on one channel will not drain these resources for the other channel. Although not quite as isolated as two independent transformers, this deals with most of the issues created by using a single supply for both channels, or worse a single supply for all the amplifier/receiver functions. I have read that there is a cogent argument for sharing a single transformer, though my personal preference is to have two completely separate power supplies. The photo shows new and old power amp boards side by side, with a polystyrene cap in place of one of the ceramics.

Now the fun began. The power supply boards mount the reservoir capacitors an 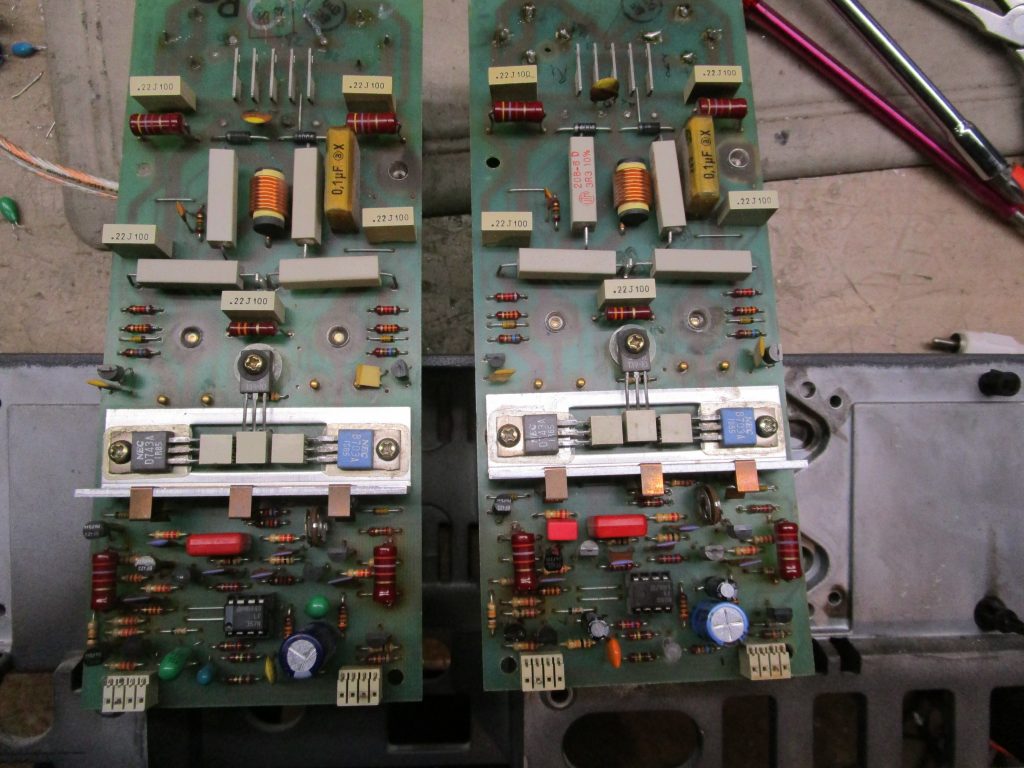 d bridge rectifier on the track side of the board- which makes their removal and replacement somewhat difficult. The capacitors have small stand offs and four connectors, of which only two are active, though fortunately a company (www.revox-online.de) provides a replacement kit of 4 10,000uf 63v capacitors that replace the original evo 4700uf 63v units. Without these it would have been extremely difficult to undertake this work. Having mastered the challenge of removing these, involving the use of a jewelers saw to get underneath the caps to remove them, the rest of the upgrades went relatively smoothly.

There is another limitation  to these units, which is that some of the PCB’s have tracks that lift with even the smallest amount of heat (applied with a Hakko vacuum desolder system), which resulted in having to track down minute and invisible breaks in the PCB or use the leads of the new components to replace lifted track. On one of the units there had been previous repairs undertaken, and I was relieved to see from this unit and read from others experience that I was not the only one with this challenge.

On both units the output transistors had been replaced, in one case by a good choice and in another by an less good choice, so I replaced the now unavailable 2N6031/2N5631 with MJ15004G/MJ15003G respectively on the unit with the less good choice. The original bridge rectifier was also upgraded in support of the larger value power supply capacitors.

Finally the input stage of the power amp employs an LF357 op amp, which has a high slew rate and relatively low noise, however op amps, like most all electronic components have progressed over the last decades and I decided to try some alternatives, however the only drop in replacement is the very expensive OPA627, which at $30 each  certainly impacted the budget. On reflection it would have been a good idea to add some further decoupling to the IC power lines (there is none originally fitted), however with the experience with the PCB tracks and lack of space, I opted to forgo this. Given the cost of the IC’s and one unit being a spare, we left the original IC’s in one unit and installed the OPA627 in the other.

There was a difference in sound, the OPA unit having a more transparent and dynamic overall sound compared to the “warmer” LF357 unit, though I was really impressed by the overall balance of sound delivered by both of these units and would be happy with either configuration.

The rest of the unit received the same treatment, use of WIMA film types where appropriate and possible, especially in the replacement of the tantalum units, Nichicon Audio (FG/KZ/KA) types and low impedance types (PW/HE), ELNA SIMLIC II and some MLCC CGO ceramics as appropriate. In all cases the original capacitance values were replaced like for like, though usually with a higher voltage rating. The RF sections only had their electrolytics changed and the CPU board was left alone.

The result is two fine sounding receivers, which deserve their premium reputation, though working on them certainly provided some challenges. 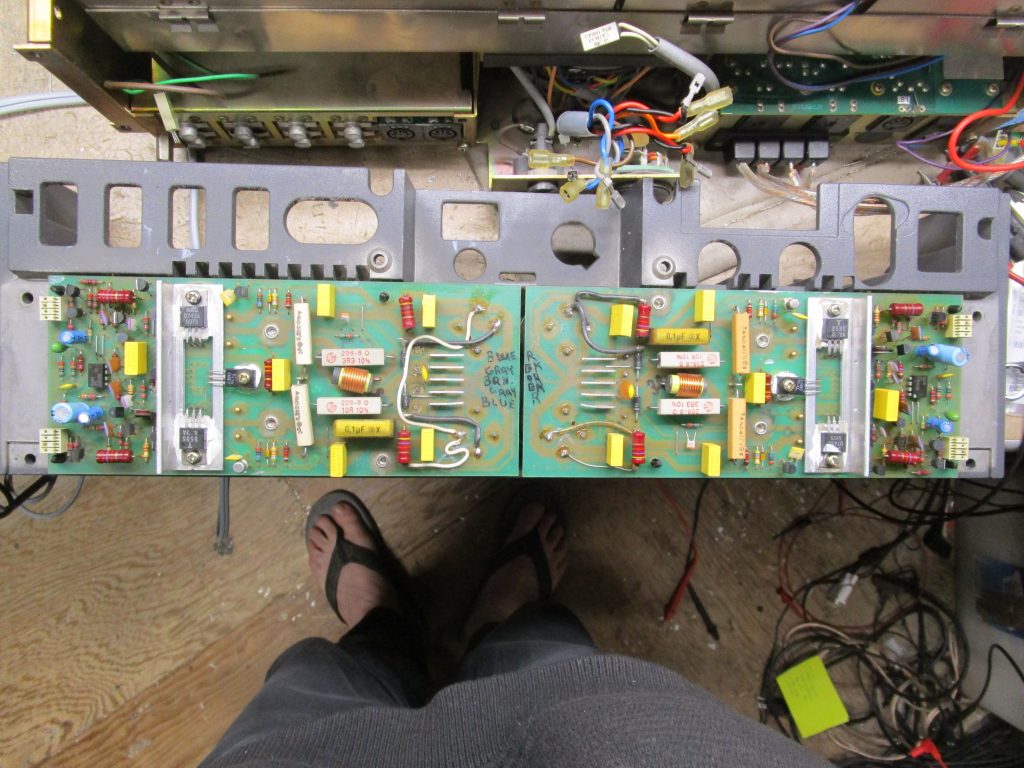 Photo show the second unit prior to upgrades, with the rear heatsink removed and feet with appropriate footwear

There was an intermittent problem with the OPA627, a low frequency oscillation that would occur randomly. The OPA 627 shows pin 8 as NC, as does the original LF 357, however on the revox pin 8 is tied to earth. So after some assistance form the folks at the TI user message board, the OPA 627 was removed and replaced with an OPA 134, with Pin 8 lifted so that there is no connection between that pin and the IC socket. The amp now sounds fantastic again, and there was little or no difference (measurable or listenable) from the OPA 627.