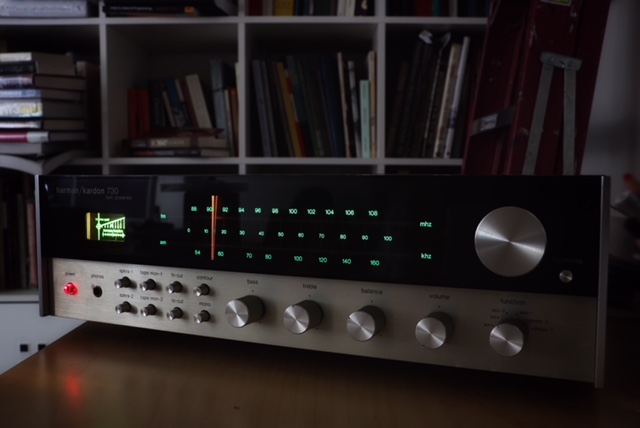 I have worked on a couple of HK330 and wanted to know what the bigger brother would sound like. The Marantz 2230/2235 and Pioneer SX737 are the equivalent contemporary peers of this receiver and share a number of common design philosophies, however the HK*30 series has a dual power supply as the most significant difference. It has always been my belief that two independent power supplies are superior to a single power supply in power amplifiers, so when the opportunity to upgrade a HK730 came along I could not resist.

There are a number of areas which can be effectively upgraded in this receiver and each of these is outlined below.

Power supply: The original power supply used 4,700uf 50V reservoir capacitors which have been upgraded to 10,000uf 80v (the voltage only because of the physical dimensions) and the bridge rectifiers  have also been upgraded in capacity (amperage) and voltage. The other electrolytic capacitors have been replaced with low impedance types (Nichicon) of the same values. The lower voltage rail that supplies the lamps and indicators has a separate power supply board, keeping this supply away from the audio chain. Again all the electrolytics have been replaced with low impedance types.

Preamp: All the capacitors have been replaced by either low impedance or audio electrolytics for the higher values or WIMA film types for the lower values with some original ceramics having also being replaced by MLCC CGO Ceramics.

Equalizer(Phono): There are a number of modifications that improve the RIAA equalization curve that have been published and tested and these have been implemented,with larger capacity electrolytics, both Audio and low impedance types with film WIMA used in lower values and replacement of some ceramics as described above. The overall result is an improvement in the accuracy and bass response of the phono section, with a number of people preferring this to the Pioneer and Marantz equivalents.

RF section: Here there was a minimal intervention approach, replacement of the electrolytics with low impedance and audio types and replacement of of those tantulums in the audio chain with WIMA film types. 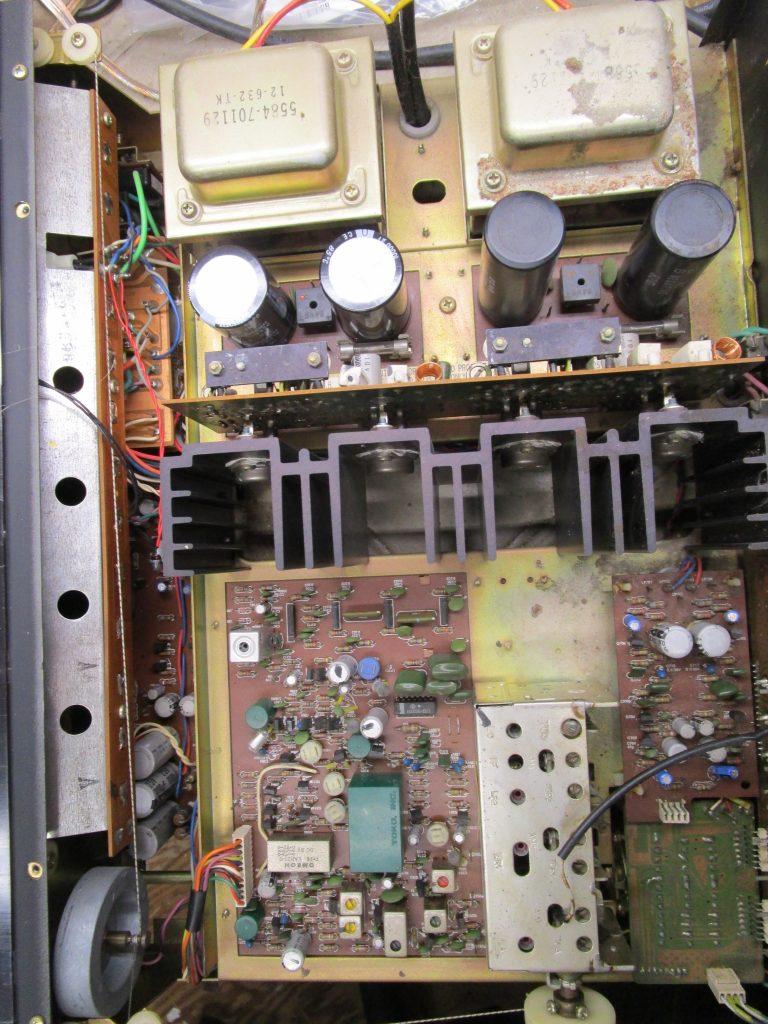 Finally the lamps were replaced with LEDs giving that great green glow.

Overall the receiver sounds excellent. Subjectively there is more dynamics and transparency  with a lower noise floor and certainly less distortion than the original. There is a “warmth” to the overall sound that is quite appealing and with suitable speakers, say JBL or other relatively high efficiency types, the overall sound will be certain to impress.  In comparison to the  Marantz or Pioneer- and this is all from memory, so highly subjective, the HK has more “oomph” and a relaxed sense of “power”.

So yes my hypothesis that two power supplies is better than one is borne out in the power amp section, and the phono stage is really very good indeed, which makes these HK series very appealing….and then there is that great green glow…

The picture to the power supply shows the power supply under rebuild with the new capacitors installed on the left.The picture below shows the rebuilt equalizer board, which in this example also includes new low noise transistors, which have been matched for Hfe. There are also a couple of resistors that have been replaced with modern 1% tolerance types. 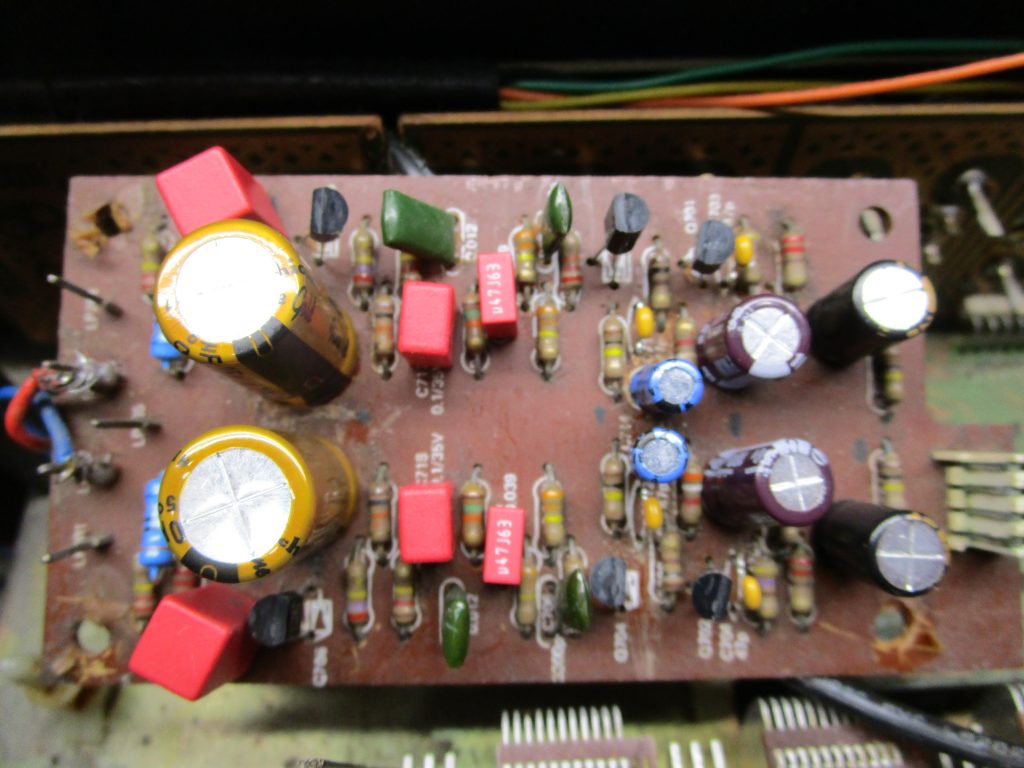 The picture below shows the rebuilt power amplifier board 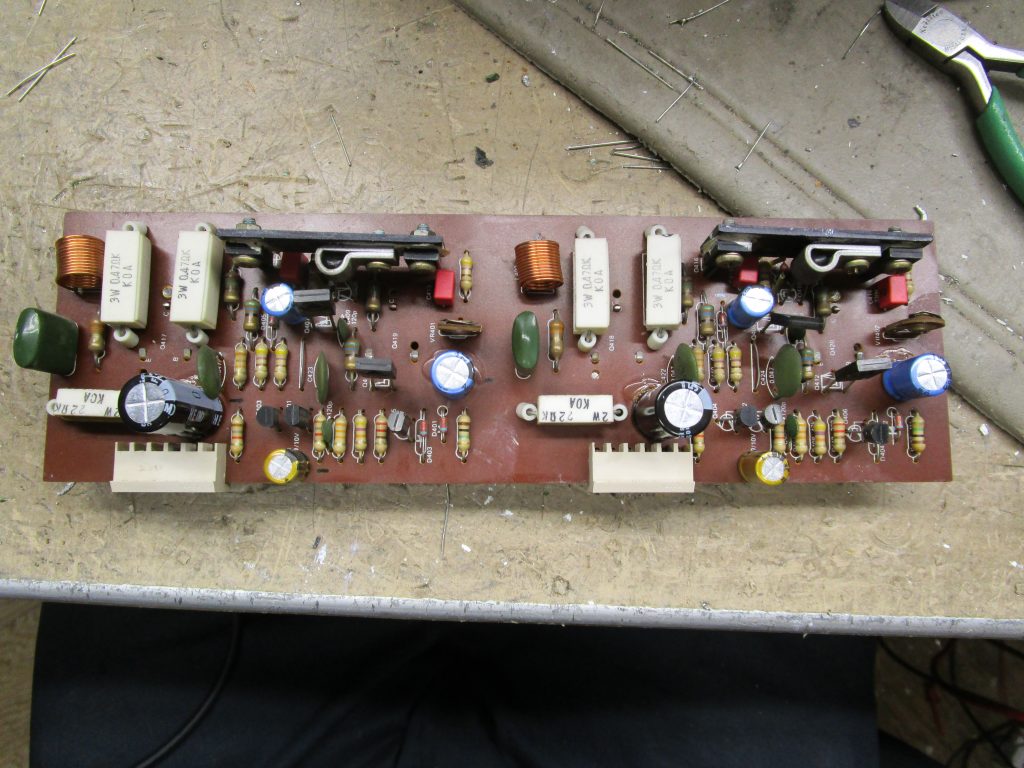