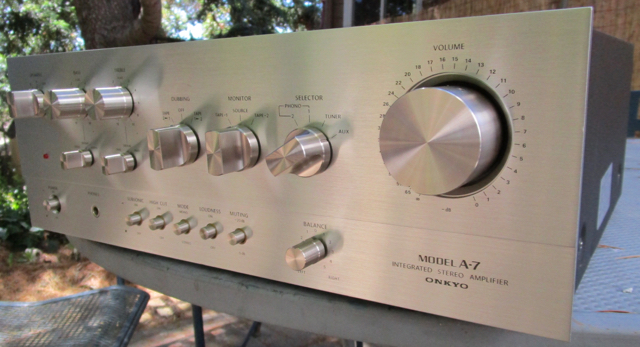 I recently completed an upgrade of an Onkyo A7, which is the most comprehensive one for these amplifiers I have done. Since writing the original blog, I have made a number of further improvements, which are detailed below.

Starting with the power supply section, my customer asked that the 25,000uf 55v main capacitors be replaced, so after an analysis of the available options two Nippon Chemicon 27,000uf 100v units were installed, the original units were also Nippon Chemicon. These units are about 20mm taller, but the same diameter, and sit inside the case with no problems. As these had been done I decided to replace the main rectifier diodes, so UF5402 diodes were installed. The power supply capacitors were replaced with Nichicon PW series, except for C706 which is Bipolar, and here a Nichicon BP type was used. The relay was also replaced. One thing that appears to regularly blow on these units are the 56 ohm resistors R653/R655 and R654/R656- so I always check them and generally replace them as well. All the electrolytic capacitors have been replaced, C605/C606 4.7uf 50v with WIMA film 4.7uf 50v, though again more recently I have been using 10uf UES Muse Bipolar caps, which is, to me, an improvement. Alternatively, there is sufficient room to put polypropylene caps here. Again after firther experimentation, I have opted for C619/C620 to be 1000uf UKA 25v caps. C633..C636 I now replace with 33uf UHE low impedance caps. The emitter resistors R659~R662 were replaced with Dale 1% 5W resistors. May-2017– I have just completed another A-7 upgrade, and measure the distortion at around 0.02% THD+N- which considering the spec is 0.1% is quite an improvement. This unit has all new transistors, including the outputs, except for the phono stage, as well as the mods described above.
Jan 2021- With the new upgrades mentioned above, THD has come down to 0.003% and THD+N to about 0.09%. Sonically the amplifier is more transparent, detailed and dynamic.

Further updates: Since the original upgrades I have been refining the “recipe”, looking for further improvements in performance. This has involved further increasing some of the decoupling cap sizes, replacing some of the smaller ceramics and using more of the Panasonic polypropylene caps and WIMA FKP/MKP rather than the polyester MKS series where size permits. There are additional capacitors added to the phono section (the PCB has the markings for them) as well.