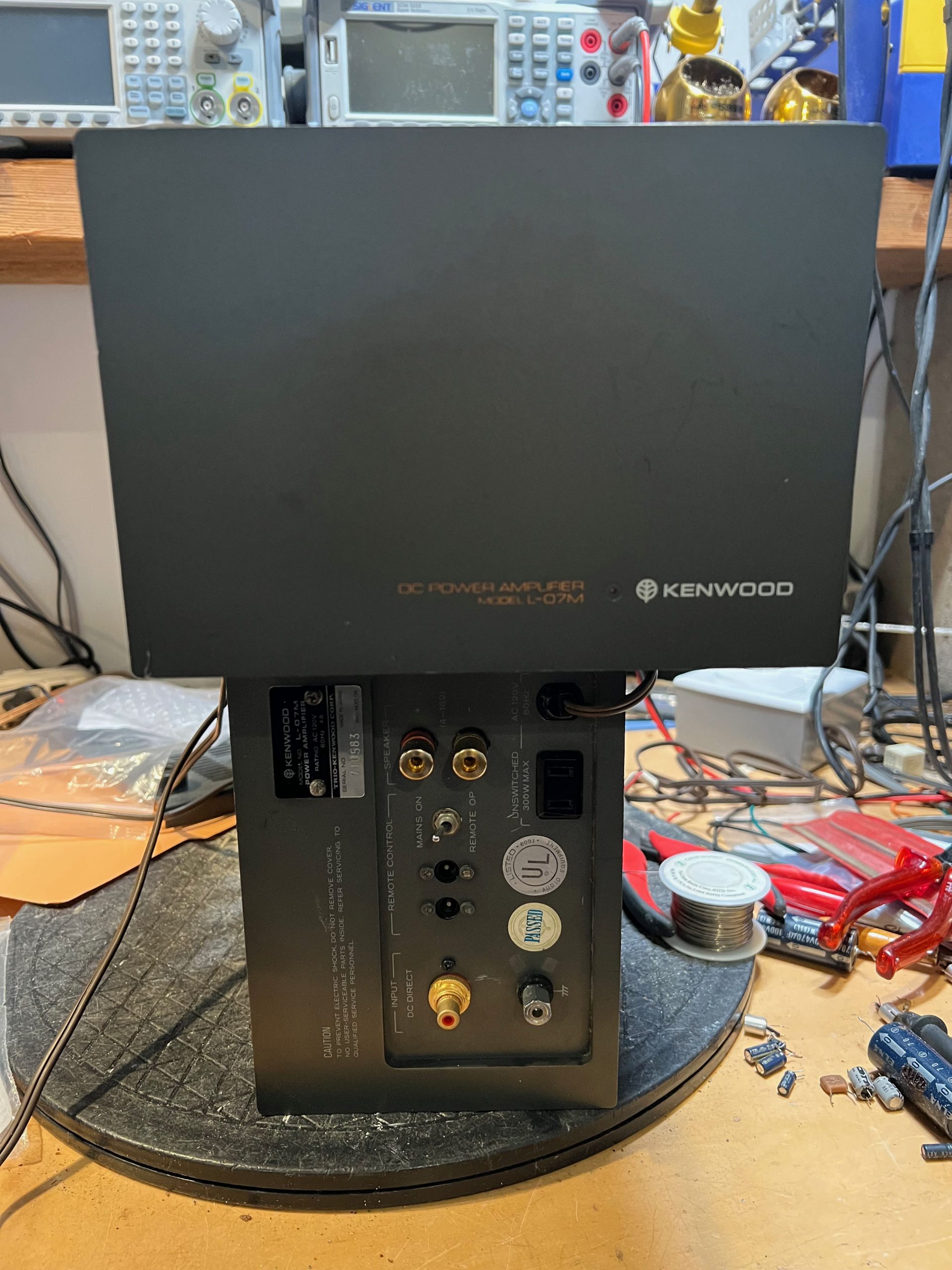 By QuirkAudioNovember 26, 2022Restorations and upgrades
No Comments

Kenwood made some extraordinary mono block amplifiers during the late 1970’s and early 1980’s. One of the key design principles behinds this was the use of very fast DC coupled circuits, and the inclusion of circuitry to enable these amps to sensing and account speaker cable effects.

The circuits for the L07M and L08M both include a dual FET differential input stage, which is in a single case. The L07M circuit is simpler than that of the L08M, which includes a unique feedback system for sensing the speaker cable.

Both amplifiers benefit from having all the electrolytic capacitors replaced, and as with most power amps some judicious increase of capacity is warranted. For example the L07M originally had 18000uf 71v fitted and these were replaced with 22000uf 80v. This dis require some adjustment of the mounting on the PCB as the original holes do not quite match up, and the fit is quite tight. The L08M has 15000uf 80v fitted and these could easily accommodate 18000uf 80v. The L08M has two power transformers and a relay transformer, whereas the L07M has a single power transformer and a relay transformer. It is interesting that many modern amps use this approach.

The L07M has two versions, Mk1 and Mk2. The Mk1 had a number of film and ceramic caps that should be replaced. There is an excellent thread on AudioKarma (https://www.audiokarma.org/forums/index.php?threads/kenwood-l-07m-ii-issues.97091/) that describes what needs to be done. Additionally some of the values of the electrolytic capacitors were upgraded. The 28v zener diodes were also replaced, as were the input resistors

The L08M has two relays, the Negative feedback Relay and the speaker relay, whereas the L07M has only a speaker rely, in both cases all were replaced, however the mains relays were left original on both amps.

Both of the amps use STV-3 or STV-4 diodes for bias, which are no longer available. The STV3 is three diodes in series, the STV-4, four diodes in series, and both are encapsulated in a single plastic housing, which has legs that are easy to break off. There can be replaced with 3 or 4 individual diodes.

Both of these amps are mechanically tricky to work on, and have to really be fully disassembled to get to all the components. The L07M does allow the disconnection of the transformer which is useful.

Both these amps measure extremely well with performance that exceeds there original, and already impressive, specifications. They sound magnificent, and if the chance arises I will certainly buy a pair for myself, the difficult choice will be which ones, the L07M or L08M?

There is a review of my upgrades on the L08M on https://www.audiosciencereview.com/forum/index.php